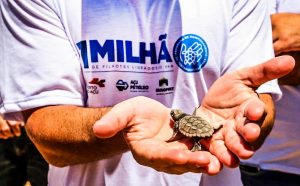 This Wednesday (February 10), the Port of Açu celebrates the release of 1 million sea turtle hatchlings to the sea. The event was closed to the public due to the pandemic and held at Reserva Caruara, a conservation unit maintained by Açu that protects 4,000 hectares of restinga-type sandbank. Created and maintained on a voluntary basis, the reserve is the largest private conservation area in Rio de Janeiro State and the largest in Brazil dedicated to the preservation of restinga, one of the most fragmented and threatened ecosystems in the country.

The region is a priority spawning area for the Caretta caretta species, known as loggerhead, and threatened with extinction. The symbolic act was attended by representatives of Porto do Açu Operações, Açu Petróleo and Ferroport, all of them subsidiaries of Grupo Prumo that jointly run the Port of Açu’s Sea Turtle Monitoring Program (PMTM in its Portuguese acronym).

PMTM has the mission of identifying, protecting and monitoring turtle nests along 62 kilometers of the Northern Rio de Janeiro State coast (from Pontal de Atafona, in Sao Joao da Barra, to Barra do Furado, in Campos), working on every stage from the spawning to the release of the hatchlings to the sea.

The program’s teams also do educational work throughout the year, involving schools, beachgoers, and fishermen, seeking to raise public awareness about the importance of preserving the species. The program has already carried out more than 100 release actions that were open to the public. 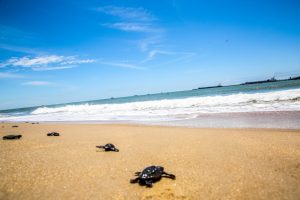 “We are very proud of the milestone reached after 12 years of the program and we want to share this result with the community, which is increasingly involved in our commitment to the preservation of turtles that come to the region to lay their eggs. This achievement reaffirms our position of reconciling the development of our business with biodiversity conservation,” said Vinícius Patel, the Port Administration Director of the Port of Açu.

Under a partnership with the community, more than 14,000 turtle nests have been identified and protected.

The work meets the technical guidelines set by the Chico Mendes Institute for Conservation and Biodiversity (Centro Tamar/ICMBio) and the State Environmental Institute (Inea).